A lot of data is in the form of counts (whole numbers or integers).

The Poisson distribution was made famous by the Russian statistician Ladislaus Bortkiewicz (1868–1931), who counted the number of soldiers killed by being kicked by a horse each year in each of 14 cavalry corps in the Prussian army over a 20-year period. The data can be found here, if you are interested.

To fit a Poisson regression, we run a generalized linear model with the function glm().

We will illustrate a Poisson regression with data on the number of awards earned by students at one high school.

Predictors of the number of awards earned include the type of program in which the student was enrolled (e.g., vocational, general or academic) and the score on their final exam in math.

The response variable is the number of awards earned by each high-school student during the year ($num_awards).

The predictor variables are each students’ score on their math final exam ($math_score, continuous) and the type of program in which the students were enrolled ($program, categorical with three levels: general, academic, vocational).

The Poisson distribution assumes that the mean and variance of the response variable, conditioned on the predictors, are equal. We can check this.

We can also make a ‘histogram’ of these data 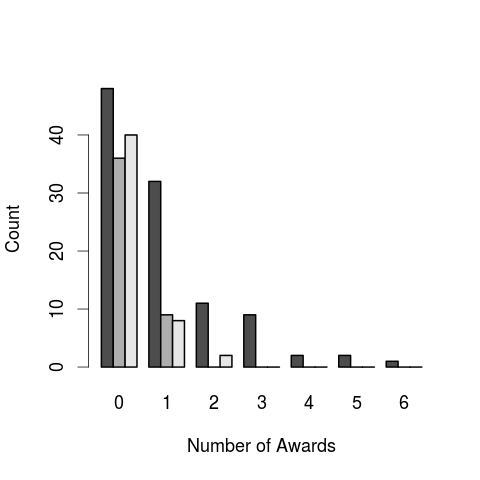 Deviance Residuals: Deviance residuals are approximately normally distributed if the model is specified correctly. Here, it shows a little bit of skeweness since median is not quite zero.

Coefficients: The Poisson regression coefficients, standard errors, z-scores, and p-values for each variable.

First, we can eyeball this by checking if the residual deviance is similar to the residual degrees of freedom (it should be, because the variance and the mean should be the same).

If the residual deviance is larger than residual degrees of freedom, this suggests that there is extra, unexplained variation in the response (overdispersion). Overdispersion can be compensated for by refitting the model using quasi-Poisson rather than Poisson errors.

Second, we can explicitly run a goodness-of-fit test.

If the residual difference is small enough, the goodness of fit test will not be significant, indicating that the model fits the data.

The two degree-of-freedom chi-square test indicates that $program is a statistically significant predictor of $num_awards, so we keep our original model.

We first need to calculate and store predicted values for each row in the original dataset (we have enough data here that, at least for our purposes, we do not need to generate a new vector of math_scores).

To plot them, we need to order the data by $program and $math_score

Now, we can plot the data points (adding some jitter to the counts, so that we can see the individual points), and add the predicted lines. 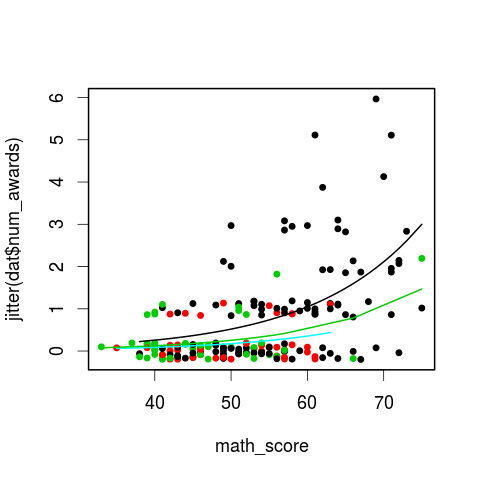 Note: In the call to predict(), we could leave out type = "response". This would generate predicted values on the log scale, and we would need to antilog (exponentiate) them to get counts.