Many statistical problems involve binary response variables. For example, we could classify individuals as alive/dead, healthy/unwell, employ/unemployed, left/right, right/wrong, … etc. A regression of binary data is possible if at least one of the predictors is continuous (otherwise you would use some kind of categorical test, such as a Chi-squared test).

Do you have unique values of the predictors for each 0 and 1?

R treats such binary data is if each row came from a binomial trial with sample size 1. If the probability that an individual is dead is p, then the probability of obtaining y (where y is either dead or alive, 0 or 1) is given by an abbreviated form of the binomial distribution with n = 1, known as the Bernoulli distribution.

Binomial data can either be modelled at the individual (binary response) or group (proportion) level. If you have unique values of one or more explanatory variables for each and every individual case, then a model with a binary response variable will work. If not, you should aggregate the data until you do have such explanatory variables (e.g., at the level of the household, town, state, population, …).

At the individual level we can model each individual in terms of dead or alive (male/female, tall/short, green/red, …), using logistic regression (or logit model).

Let’s look at the incidence (presence/absence) of a breeding bird on various islands (data).

The data show the $incidence of the bird (present = 1, absent = 0) on islands of different sizes ($area in km2) and distance ($distance in km) from the mainland.

We begin by fitting a complex model involving an interaction between distance and area:

Then we fit a simpler model with only main effects for distance and area:

We now can compare the two models using anova(). In the case of binary data, we need to do a Chi-squared test.

The simpler model is not significantly worse, so we can go with that one.

Fitting and interpreting the model

As normal, we have the formula, the deviance residuals (a measure of model fit), then the coefficient estimates, their standard errors, the z-statistic (sometimes called a Wald z-statistic), and p-values.

However, in contrast to a regular linear model with Normal errors, the coefficient estimates give the change in the log odds (the logarithm of the odds, or logit) for a 1-unit change in x:

The logistic regression coefficients give the change in the log odds (the logarithm of the odds, or logit).

For categorical predictors, the coefficient estimate describes the change in the log odds for each level compared to the base level.

Confidence intervals around the logits can be calculated with confint().

Logits (log odds) are just one way of describing the model. We can easily convert the logits either to odds ratios or predicted probabilities.

Odds ratios are a relative measure of effect, which allows the comparison of two groups. It is a popular way of presenting results in medicine, especially of controlled trials. Here, the odds of one group (usually the control) is divided by the odds of another (the treatment) to give a ratio. In this case, if the odds of both groups are the same, the ratio will be 1, suggesting there is no difference. If the OR is > 1 the control is better than the other level. If the OR is < 1 the treatment is better than the control.

We can calculate the odds ratios by exponentiating the coefficient estimates.

We can generate predicted probabilities for continuous and categorical variables.

We can generate predicted probabilities for each row in the original dataset, by calling the predict() function (more details below).

However, to better plot these relationships, we should input a specific range of x’s that we predict y’s for.

To plot the fitted line of a generalized linear model, we generally have to use the predict() function, because the model, although linear, is not a straight line that can be plotted with either an intercept or slope, as we used for lm() and abline().

The function predict() is a general wrapper for more specific functions, in this case predict.glm(). We have to specify:

There are, as usual, at least two ways we could do this: (i) use the original model, (ii) generate new logistic models for each predictor.

(i). Use the original model

We can use model2 and generate values for the range of $area contingent on the mean value of $distance, and vice versa.

First, generate a sequence of x’s from which to make predictions. Because area and distance are on similar scales, we can use the same sequence for both.

Make a new dataframe, of x.seq for area and x.seq for distance, along with the mean of the corresponding column

Now use predict() with the new dataframe.

We could then plot y on area and y on distance, as illustrated below.

Alternatively, we can make two separate individual logistic regressions and make predictions from those.

First, run two models, one for area and one for distance.

We then need to make a sequence of x (e.g., $area) values from which to predict the y (predicted probability of $incidence).

In this case, because we are passing a single vector (rather than a dataframe (=list)) to the newdata argument of predict(), we need to put it inside a call to list().

Now we have two vectors, xv and yv, that we can use to plot the fitted line. 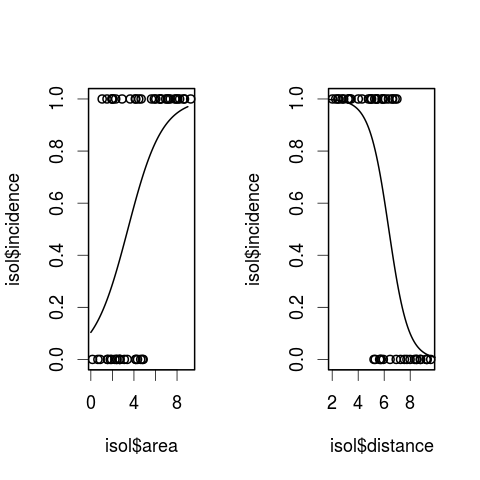 At the group level, we look at the proportion of successes and failures (or male/famale, tall/short, dem/rep, …) in groups/populations/sites.

In all these cases, we know both numbers … those of successes and those of failures (in contrast to Poisson regression where we just have counts of successes).

In the past, the way this data was modelled was to use a single percentage as the response variable. However, this causes problems because:

In the GLM framework, we can model proportion data directly.

R carries out weighted regression, using the individual sample sizes as weights, and the logit link function to ensure linearity.

Overdispersion occurs in regression of proportion data when the residual deviance is larger than the residual degrees of freedom. There are two possibilities: either the model is misspecified, or the probability of success, p, is not constant within a given treatment level.

To deal with overdispersion, we can set family = quasibinomial rather than family = binomial

In contrast to the binomial response, in the case of proportion data, our response data is a matrix of two columns, one column of successes and one of failures.

This matrix must be single object. We will use cbind() to stick two columns together.

In this case, we have the number of males and females in a range of populations. Our question is: Does sex ratio vary with population size?

To model proportion data, R requires a unique form of the response variable - a matrix of two columns of successes and failures, in this case males and females.

We specifiy the model as follows.

The output is familar. For this continuous predictor, we get an intercept and slope, and the p-values indicate whether they are significantly different from 0.

For categorical variables, we get, as usual, the base level mean, then differences between means. Furthermore, the coefficient estimates are in logits (ln(p/(1 - p)). To calculate a proportion (p) from a logit (x), you need to calculate 1/(1 + 1/(exp(x))).

However, we have substantial overdispersion (residual deviance = 22.091 is much greater than residual d.f. = 6). One reason for overdispersion is if the model is misspecified. Let’s try log(density).

There is no evidence of overdispersion (residual deviance = 5.67 on 6 d.f.) in this new model.

We can conclude that the proportion of males increases significantly with increasing density, and that the logistic model is linearized by logarithmic transformation of the explanatory variable (population density).

We need to use predict() as above.

Some kinds of proportion data are better analysed differently.

Percentage change in some continuous measurement (e.g., weight, tree diameter) is best modelled either as an ANCOVA of the final measurement with the initial measurement as a covariate, or by specifying the response as a relative change: log(final/initial), both of which should be linear models with normal errors.